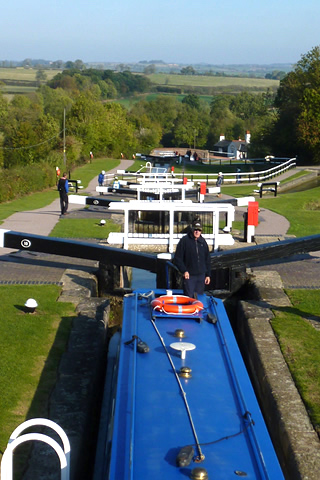 The Foxton Locks are situated on the Grand Union Canal and are an easy three hour cruise from the Leicestershire town of Market Harborough.

The flight of locks at Foxton was built in 1810. It took 45 minutes to climb 75 foot and used thousands of gallons of water. Boat size was restricted as was the maximum load each could carry. With the railways in direct competition there was a need for bigger boats to be able to carry coal from the north direct to London. Wider locks were dismissed as these would use too much water from the canals summit pound.

Engineer Gordon Cale Thomas was put in charge of the project and his solution was to build a boat lift.

Built by W H Gwynne of Hammersmith and opened in the summer of 1900 the Lift consisted of two tanks or Caissons linked by wire rope. a steam driven winch at the top, wound the rope on one side of its drum and simultaneously let it off the other, raising or lowering the tank. Each tank was full of water and weighed 230 tons with or without a boat. Two boats or a barge would fit in to each tank.

The lift was closed in 1911 and was only maintained for a few years and therefore soon fell into decline and in 1928 the machinery was sold as scrap.

In 2008 the Foxton Locks Partnership completed a project, funded by the lottery, which has resulted in the lift site being removed from the 'Monuments at risk' register. The Foxton Locks Partnership together with the Foxton Inclined Plane Trust intend to restore the lift to full working order. Foxton Locks is a very popular location with boaters, walkers and cyclists. A tow path leads visitors alongside green fields and countryside to the top of the staircase locks. Stay an hour or two and watch the bustling scene as the colourful boats make their halting progress up the flight of locks.

Visit the Foxton museum opened in 1989 and situated in the Boiler house of the old lift. The museum tells the story of life on the canals and its history at Foxton. Take time to visit the tea rooms or have a browse around the shop for a souvenir. Be sure to visit Jack Cryer at his cottage where he and his family once lived and worked.

What better way to relax than to pop in for a drink and a bar meal at Foxton Locks Inn, an old, attractive pub, which benefits from wonderful waterside views and plenty of outside seating. Walkers and boaters are always welcome.