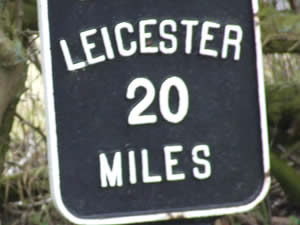 Once one of England's largest and oldest towns today Leicester is a busy and vibrant city. Transformed in the late 18th century by the industrial revolution The Canal was completed in 1794 and this provided a way to transport iron and coal into Leicester. Running through the town are two waterways the the River Soar and the Grand Union Canal. Leicester became famous for boot and shoe making and by 1861 there were 2,741 boot and shoemakers in Leicester.

Dating around 160 AD The Roman Baths were more like Turkish Baths than the swimming pools we know today. The bathers would pass through cold, warm and hot rooms and then to a sweat room. Roman Leicester's citizens used the baths not just to get clean, but as a place to exercise, socialise and conduct business.

Nearly 2000 years old and one of Leicester's most famous landmarks an example of Roman walling is the Jewry Wall. The Jewry Wall is the second largest surviving piece of Roman civil masonry in the country and its two arched doorways would have been situated between the bathhouse's gymnasium and cold room.

The museum tells the story of Leicester from prehistory through to the end of the medieval period. Ask the questions What tools were used in Stone Age Leicester? How did a Roman citizen dress? These and many more are answered as you come face to face with real objects from Leicester's past.

A church until 1927 and with its tall spire the cathedral is an important part of Leicester's life and work. Inside the cathedral, there is a memorial to Richard III, the tragic and muchmaligned king who was killed at the Battle of Bosworth a few miles away and buried at the Grey Friars in Leicester.

For an experience that is out of this world visit the UK's largest 360° planetarium Go on an interactive journey through six stunning galleries, explore the Universe and experience space at The National Space Centre. The National Space Centre is the only visitor attraction solely dedicated to space. Learn facts and mythical information about the planets. Designed as a news desk 'Space Now' brings you up to date with space related news as it happens.

Divided by the River Soar into two areas Abbey Park is Leicester's premier park and lies approximately one mile north of the City centre. To the east of the river lies the highly decorative Victorian part of the park with its evergreen shrubberies, trees, lakes and formally planted flower displays and to the west of the river lies the fascinating Abbey Grounds. Within this area are the remains of the twelfth century Leicester Abbey and the ruins of Cavendish House, a seventeenth century mansion.

For Shopping Leicester is a diverse city where you can find the big brand names to the small independent shops of St Martin's. The "Golden Mile" is packed with shops and traders selling South Asian food, clothing and jewellery. The has been a Market in Leicester for over 700 years and it is now Europe's largest covered market. In the Market Centre are many more indoor stalls, selling fresh fish, meat, cheeses and the local specialities of Melton Mowbray Pork Pies and Stilton.